A Night with Steve Scorfina 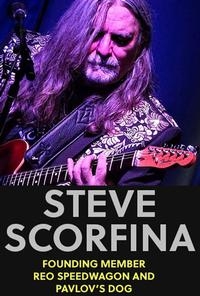 Steve is the real timeless American Roots feel good music from the soul, to rock n roll your soul. A living legend, the thing that sets him apart is his songwriting fitting his unique style & guitar sound. In St. Louis, he debuted as a Mississippi Bluesy lead guitarist influence by the greats in the Northern Delta. In his teenage years cutting his teeth & playing at Chuck Berry's Park as a regular with Michael McDonald. At age 19 he brought REO SPEEDWAGON to their record deal penning their first single (Gypsy Woman Passion). All will identify with Scorfina's garnered roots. You'll hear his songwriting & haunting guitar style of his recording years with CBS in Pavlov's Dog & Gulliver. His guitar stylings are featured in Alice Coopers & Smashing Pumpkins version of the song, "We're All Clones". Scorfina always has many irons in the fire. As a 2x Classic Rock Hall of Famer, Live Scorfina showcases his songwriting with his multiple acts, AMBASSADORS feat. the songwriting of Steve Scorfina, David Torretta & Micheal Supe Granda, a supergroup of St. Louis musical Icons;

Showtimes for A Night with Steve Scorfina