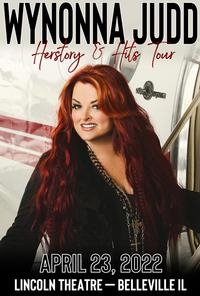 Wynonna's Herstory Tour celebrating 30 years as a solo artist comes to the intimate setting of the Lincoln for one night only, April 23. As a loyal fan of the Lincoln you have a chance to buy tickets before they go on sale publicly from now through Sunday 2/27.

Once dubbed by Rolling Stone as "The greatest female country singer since Patsy Cline," Wynonna Judd first gained fame as part of one of the most successful musical duos of all-time, The Judds. A five-time Grammy Award winner in her own right, and recipient of over 60 top industry awards, Wynonna holds multiple hold, platinum and multi-platinum certifications from the RIAA of over 10-million units sold for albums released throughout her impressive 30-year solo career. On top of that unprecedented feat, Wynonna has earned 20 #1 hits and countless charting singles to make her one of country music’s most celebrated artists of all time.