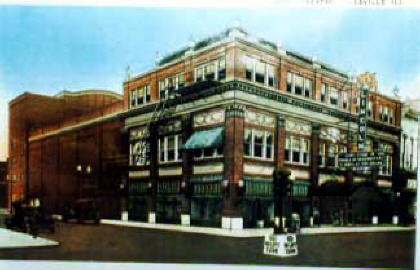 Opened on October 6, 1921 with four acts of vaudeville and a silent movie, "The Old Nest", the Lincoln Theatre in Belleville Il, soon became the premier theatre in all of southern Illinois.   The original admission for adults was 27¢ for the balcony and 36¢ for the main floor.  On January 10, 1922, the St. Clair County Historical Society presented a bronze plaque to be placed on the theatre building commemorating Charles Dickens’ stay at the Mansion House Hotel.  The Mansion House Hotel stood on the same site as the Lincoln Theatre.  The Picture to the right is of the Lincoln from the late 1920's.
Many great stars have appeared at the Lincoln including a young Ginger Rogers in November of 1926.  About the same time, a fresh, new comedy act called the Three Nightingales, who later changed their name to the Marx Brothers, appeared in this theatre.  On Thursday nights, amateurs from the audience could perform on stage.
In 1927, a Wurlitzer organ was purchased for $30,000 and installed to replace the orchestra.  This instrument was called a Unit Orchestra since it allowed full accompaniment to silent films while only having to pay one musician.  Vin James, who was once the orchestra conductor, was hired as the regular organist.  "Four Sons", the last silent film at the Lincoln, played on March 13, 1929 and the organ was soon to be silenced on August 2, 1929, due to the popularity of the new talkie movies.  It was then completely removed at a later date.  In the 1950’s Cinemascope arrived at the Lincoln and the lower part of the chandelier had to be removed because it caused a shadow on the new movie screen.  The first Cinemascope picture to play the Lincoln was "The Robe". 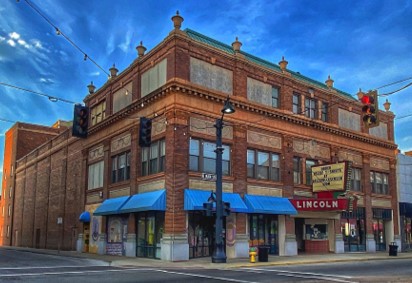 Today the theatre can be seen much like it was in the 1920's. Its was lovingly restored by Richard Wright from 1980 till 2000.  One can still feel that awe and majesty of Southern Illinois’ greatest vaudeville house.  A dream of Richard’s was to once again have a theatre pipe organ in the Lincoln.   He began collecting organs and other miscellaneous parts.  Finally, in the early 1990's, the monumental task of restoring and rebuilding these parts into an outstanding instrument began.  The organ's dedication in October of 1996 was the start of the theatre's Diamond Jubilee year.
Great care was taken in the selection of each rank of pipes for the organ so the sounds would blend well in the theatre.  As of today, the organ has 16 ranks (voices) of pipes, which can be played from its three manuals (keyboards) or from the pedals.  From the console the organist can also play real percussion instruments such as drums, glockenspiel, xylophone, chrysoglott, chimes, an oriental gong, whistles and sirens.  These sounds help bring a silent film to life as well as enhancing music during concerts.   The organ is continually changing as more ranks of pipes and more sound effects are restored and added to the organ.  Some additional voices are produced electronically.  The organ today is certainly much larger than what was installed in 1927.  This allows the performers and the audience to have a musical experience of a much larger movie palace while still enjoying the intimacy and charm of a theatre where you can walk up and speak with the entertainers after the show.
Several Cd's and cassette tapes that feature our organ are available from the organ music page.  The organ is featured in our special event shows as well as every Friday and Saturday before the feature film in the main auditorium.
Today the current owners, Sandy and Dave Schoenborn, the daughter and son-in-law of Richard continue the tradition of the Lincoln.  First run Hollywood films are featured  along with live performances from classic rock & country to artist and local favorites.  There is a party room to use before or after a B-Day party for your children.  Information about whats playing at the Lincoln Theatre can be found on the internet, our mobil app and facebook.
The Lincoln's award winning popcorn has grown into a gourmet popcorn shop call Abe's Gourmet Popcorn located in the corner of the Lincoln Theatre at 101 E Main St, Belleville IL.  Abe's make a huge varity of flavors and features their own scratch caramel recipie.