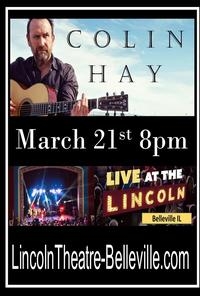 Colin Hay will be LIVE at the LINCOLN on March 21st. It will be a solo performance by Colin live on our stage.

Colin Hay, from Men at Work, has written and released some 13 solo albums, the latest being "I Just Don’t Know What To Do With Myself" an album of cover material, released through Nashville-based Compass Records, who Colin has worked with since 2003.

He has a new album of original material due for release in early 2022.

Colin is also a touring member of Ringo Starr's All Starr Band who are due to restart touring in 2022.